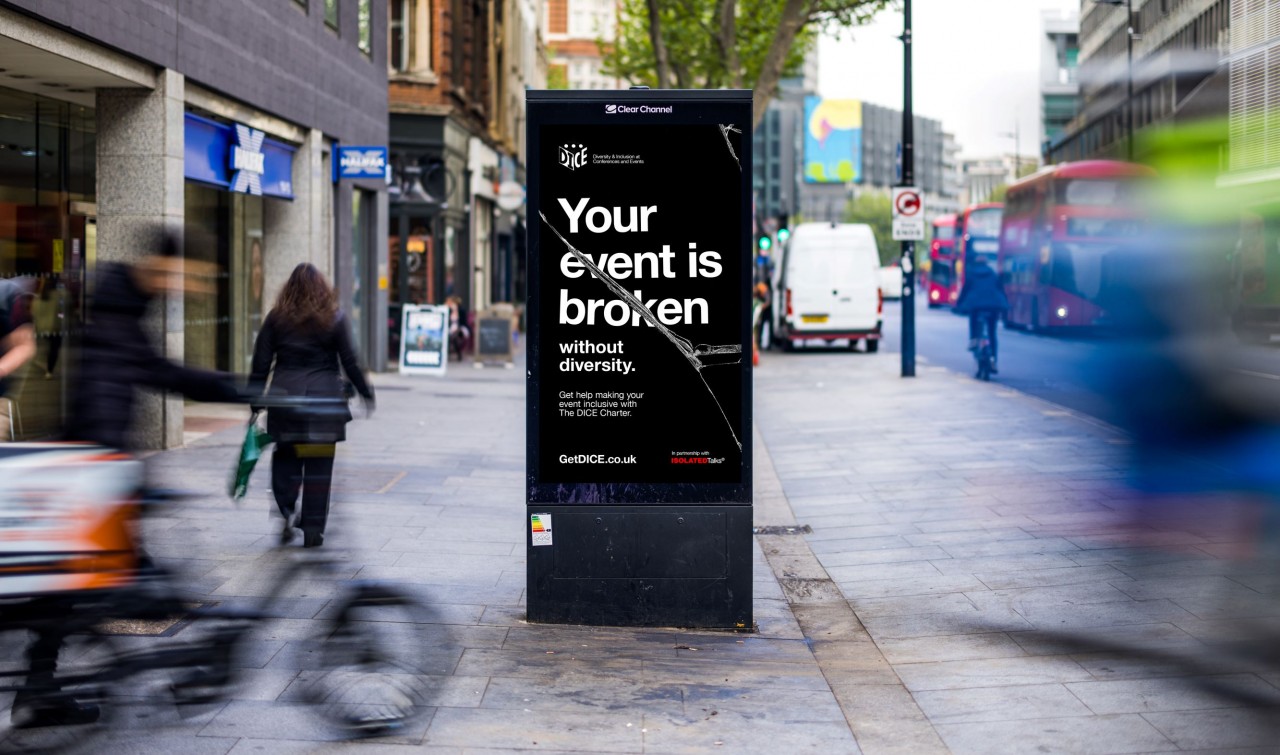 Industry group Diversity and Inclusion at Conferences and Events (Dice) has launched an outdoor advertising (OOH) campaign to challenge the lack of diversity in events.

The work is the brainchild of creative duo Katherine O’Connor and Alicia Hessey, University of Lincoln students, who responded to a brief from the Dice team as part of their sophomore project.

The “Your Event is Shattered Without Diversity” campaign will run in partnership with Isolated Talks (an initiative of creative agency Gasp) on nationwide digital billboards courtesy of Clear Channel.

The creation itself is based on the visual of a broken screen on each digital billboard, reflecting the idea that any event that only amplifies the voices of certain groups – such as middle-class white men – essentially silences all other voices. The lack of representation reflects a broken system, backed by corporate lighting that would rather discuss change than enact it.

O’Connor and Hessey say what inspired their idea “is the fact that Dice’s team says they don’t want it to exist, but it has to exist”.

“The diversity of your event shouldn’t be a choice. It’s not just about who is on your panel, but also about the content of the event. If your event isn’t inclusive, it’s inadequate. It’s broken.”

Amy Kean is one of the co-founders of Dice. She says male-dominated panels or panels that only feature white speakers (aka “manels” and “wanels”) are “morally incorrect.”

The latest news and marketing information straight to your inbox.

Get the most out of The Drum by choosing from a range of excellent email briefings, whether it’s daily news, weekly recaps or in-depth media or creative dives.

“That’s why we launched Dice; to guide people through the curation of an inclusive event. A conference without diversity in its programming is boring, backward and inevitably biased, and there is no debating that. That’s a fact.”

She adds, “Our hope with this campaign is that it will remind event organizers that talking about change is not a substitute for doing or being change. We have evidence that the Dice Charter is a brilliant catalyst for this progress.

The campaign is also part of a series of activities planned by Dice to foster greater diversity in the events industry. No event that has more than 50% male or more than 70% white in its lineup will ever be certified by Dice.

The group believe now is the time to move from awareness to action, and with this in mind, illuminating government-funded research is currently underway with the University of Surrey. The four-month project aims to reveal the extent of the event’s inequality problem, as well as use AI technology to understand bias in terminology used in marketing materials.