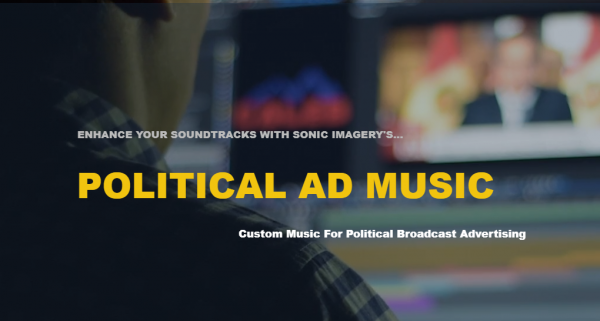 Stephen Bashaw, president of Sonic Imagery, the parent company of Political Ad Music, explains that the new musical soundtracks are modeled after Hollywood-style movie trailers which are usually made up of multiple “acts” such as:

1. The intro: a short, often silent, prefiguration of the mood of the musical track

2. Act 1: Introduction of the main theme

3. Act 2: Development of the main theme, escalation or excitement

4. Act 3: The Main Theme Further Expanded with a Decisive Ending

5. The Outro: A brief recap of the mood of the music track

The benefits of such a musical arrangement are such that the elements of these multiple acts in the soundtrack provide the music editor with a wider range of options for shaping the dynamics of the music, resulting in an increase in l impact of music on the viewer.

2. Distinct and natural “edit” points that allow the music editor to easily customize the soundtrack of any audio or video production.

3. Edit/remix options as specified by producer.

4. Original scoring services that perfectly capture the vision and message of your political campaign ad.

Bashaw adds, “Traditionally, most tracks in the production music library were basically comprised of dynamic or volume level. Political commercial music tracks offer several dynamic levels and arc development schemes that give the soundtrack much more impact. Additionally, the cinematic treatments we use, such as those found in big budget film scores and commercials, dramatically increase the production values ​​of any film or video.

If you detect any problems, problems or errors in the content of this press release, please contact [email protected] to let us know. We will respond and rectify the situation within the next 8 hours.