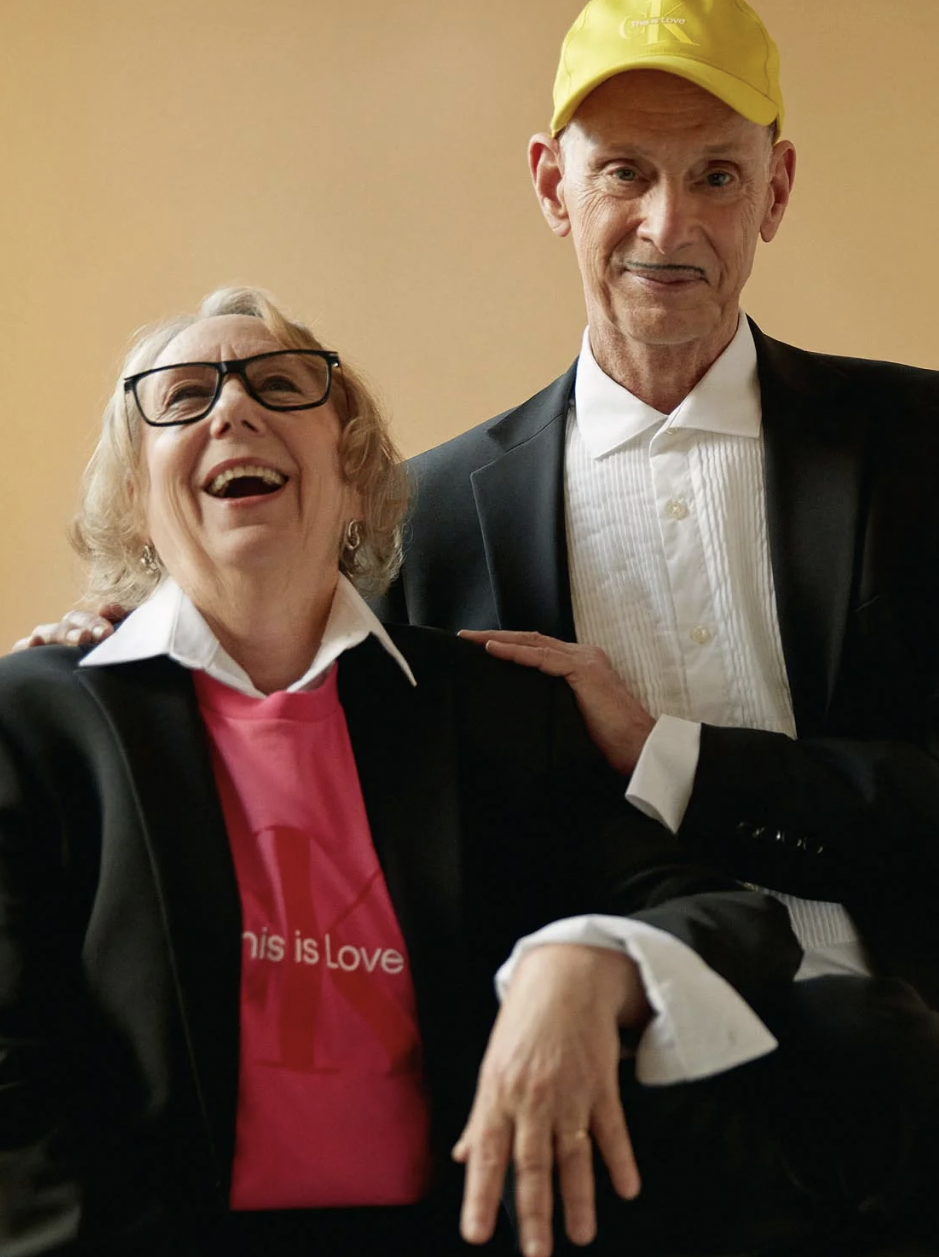 Writer and filmmaker John Waters was the face of Nike in 2019. He modeled for Saint Laurent in 2020. This year, nothing comes between Waters and his Calvins, as he and his best friend Mink Stole appear in a new advertising campaign for Calvin Klein Inc.

Waters and Stole are two of the personalities chosen to promote Calvin Klein’s ‘This is Love’ fashion line, which celebrates ‘chosen families’ and was launched in time for LGTBQIA+ Pride Month in June.

The campaign features videos of different sets of “non-traditional” but “hardcore” lovers, discussing their relationships and what family means to them, while sporting items from the Calvin Klein collection.

Sitting on a chic living room sofa and holding hands at one point, Waters, 76, and Stole, 74, are filmed talking about how they met and why they think their friendship has lasted so long .

“We met in Provincetown, which is not Baltimore, where we both lived at the same time, around 1966,” Waters recalled. “I remember Mink looked like a real Roland Park girl, but wanted to turn bad, and she found the right person.”

“John was probably the most confident person I’ve ever known,” Stole replies.

“I just think friends – male and female, maybe gay and straight – can be best friends forever, because there’s never any jealousy about boyfriends or girlfriends” , offers Waters in a one-minute video filmed for the campaign.

“Well, there’s no sexual tension, which makes it really easy,” Stole says, adding, “I’ve never been in love with you.”

“I was never in love with you. That’s why we bonded,” Waters replies. And yet, “This is love.”

The campaign sends a provocative yet assertive message while showcasing Calvin Klein’s latest collection with a “cast” of “LGBTQIA+ trailblazers, artists and advocates”.

Besides Waters and Stole, the list includes actress Sasha Lane and her brother Sergio D’Arcy Lane; three employees of The Trevor Project: members of the House of Xtravaganza from the New York underground ballroom scene; boyfriends and actors Justice Smith and Nic Ashe; ellicot city musician Snail Mail and her community; hairstylist Holli Smith and her fiancé, Pony, and Afrofuturist arts collective, Tribe.

On May 19, Klein released eight-minute videos that provide insight into the models’ various relationships. A final video reunites the models, talking about love and family.

Wearing “This is Love” clothes and other “Calvin Klein essentials”, the models are photographed with their loved ones in “quiet moments of connection, private moments of intimacy and playful expressions of their relationship”, as the says the website. “Untraditional, hardcore, real: it’s family through the lens of Calvin Klein.”

The campaign includes still shots reminiscent of prints from a photo album, as well as videos. John Edmonds was the photographer. Unlike the Saint Laurent campaign that Waters shot, with black-and-white photos depicting him scolding and generally looking like a troublemaker, this one features bright and cheerful imagery.

According to the company, the collection’s colors were inspired by the Progress Pride flag. Each item includes a label that indicates what each color of the flag represents: black for beauty; brown for power; pink for sex; orange for healing; yellow for sunlight; tan for harmony, white for non-binary; turquoise for magic and blue for serenity. The Heritage Reimagined underwear collection incorporates stripes and fabrics with swirling combinations of these colors in a nod to “the intersectionality that exists across the LGBTQIA+ spectrum of sexualities, gender identities and characteristics. sexual”.

Waters is presenting spoken word shows in the United States and Europe this month and next, and he will be one of the first speakers at the School of Visual Arts in New York on June 27. He plans to spend the summer in Provincetown, his 57and on Cape Cod. His next exhibition at the Baltimore Museum of Art, featuring objects from the private art collection he left to the museum upon his death, opens in November.

A longtime ally of the LGBTQ community, Stole has appeared in all of Waters’ feature films, dating back to Roman Candles, Mondo Trasho and Multiple Maniacs. One of the regular Dreamlanders cast and crew members, Waters, she was Connie Marble in Pink Flamingos; Taffy Davenport in Female Trouble; Peggy Gravel in Desperate Living and Dottie Hinkle in Serial Mom. Waters wrote about taking LSD with her in Provincetown when they were both past their 70s in his book, Mr. Know-It-All, The Ternished Wisdom of a Filth Elder.

A native of Baltimore, Stole recently left his hometown to be with a boyfriend in Los Angeles, Waters told the audience on his Baltimore Soundstage show on Feb. 14. “Mink is leaving Baltimore forever,” he lamented. “Last night we had a farewell dinner.”

In the Calvin Klein video, Waters alludes to their long history: “Probably the craziest thing we ever did together was a conspiracy to commit indecent exposure,” he said.

“We always hung out with a mixed crowd,” Waters said at another point in the campaign. “Straight guys, girls, bikers, drag queens, everyone. That’s why we stayed friends for so long because we weren’t like the others.

“We had to be together…we listen to each other’s jokes,” they added.

Like Waters, Stole is staying busy with speaking engagements and other appearances, including a recent online Q&A with drag queen Trixie Mattel. She is one of the “Special Guest Counselors” at Camp John Waters, the annual camp for John Waters superfans in Kent, Connecticut. She plans to be buried with Waters and other Dreamlanders at Prospect Hill Cemetery in Towson, near Divine’s grave. They call this section of the cemetery “Disgraceland”.

Ed Gunts is a local freelance writer and the former architecture critic for The Baltimore Sun.