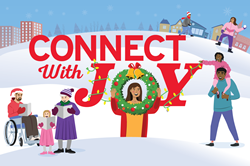 To help people looking for an escape from the holiday blues and a connection to the true source of joy and love, United Methodist Communications, the denomination’s global communications agency, has launched its advertising campaign national Advent-Neighbours.

After more than 20 months of the pandemic, many people are looking for ways to find meaningful connections with others. In the hustle and bustle of the Christmas season, it is not uncommon for people to experience stress, unhappiness from unmet expectations, and feelings of depression and isolation. The ads share that The United Methodist Church provides a way to hear a positive voice and experience community and connection in a meaningful way this holiday season.

The Advent-Neighbors campaign will reach more than twenty targeted markets such as Atlanta, Dallas-Ft. Worth and Indianapolis. Placements will include a mix of social media, paid search and display ads. Each ad will direct people to one of two limited-time landing pages at UMC.org/Joy and UMC.org/JoyEnFamilia to begin their first steps with The United Methodist Church.

“The Christmas season is a time when people are more open to experiencing something spiritual,” shared Jennifer Rodia, director of communications for United Methodist Communications. “We hope these posts encourage them to connect and find community for the holiday season and beyond.”

Over the summer, the agency launched a series of TikTok video ads for the first time. Each ad focused on a specific character and their need to connect. This test proved conclusive with nearly three million video views. Building on this momentum, the Advent-Neighbors campaign will also pick up popular TikTok spots and offer adapted versions for other media.

New York’s Times Square neighborhood, often called the crossroads of the world, will serve as a major showpiece for The United Methodist Church.

“With the increased availability of vaccines, the return of Broadway and increased tourism, Times Square has seen a significant increase in foot traffic,” said Poonam Patodia, Chief Marketing Officer. “Having the message of The United Methodist Church shared here allows us to reach many people across the country and around the world. We want people to know we’re there for them, even in the hustle and bustle of this metropolis.

Share the article on social networks or by e-mail: