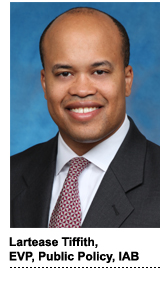 Lartease Tiffith zigzags where others have zigzagged.

There has been an exodus of public policy makers leaving professional organizations and heading to in-house work on one of the Big Tech platforms, primarily Facebook and Google.

But in January, Tiffith joined the Interactive Advertising Bureau as Amazon’s executive vice president of public policy, where he worked for more than three years.

States have passed or are drafting their own privacy laws, lawmakers are introducing bills that could hamper the data-driven advertising ecosystem, and the Federal Trade Commission is receiving a petition calling for development of rules to prohibit “surveillance advertising”.

To name just a few of the items on Tiffith’s priority list.

“Of course I know that [the technology industry] faces some criticism, and I think that’s fair,” Tiffith says. “But it’s starting to become the norm. And that neglects all the benefits people get from technology.

Also in this episode: Staying on top of the many state-based data privacy laws, finding a way to work with a less business-friendly FTC, and what it was like to be Kamala Harris’ lead attorney when she was a senator before becoming Vice President. (They still stay in touch.)