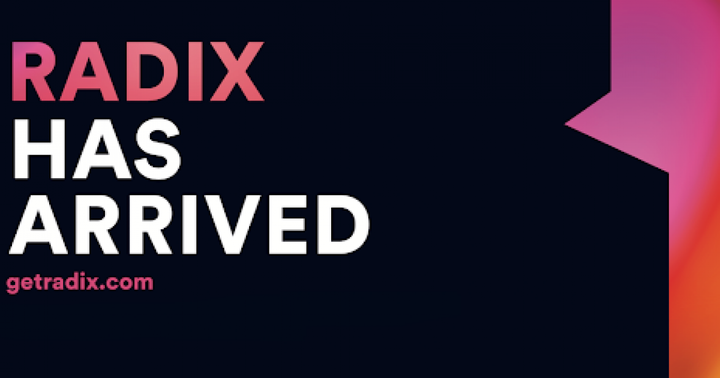 Radix, the layer 1 cryptocurrency specifically designed for decentralized finance, has launched a London-wide advertising campaign to coincide with the arrival of its Alexandria update, using the hashtag #RadixTakeover.

The Radix community has teamed up with leading advertising agency S3 to orchestrate a london underground campaign. The ads carry the message “Radix has arrived” and a link or QR code to a landing page with more information about the network and the Radix token. The ads are displayed in thousands of individual subway stations and are expected to receive millions of impressions. Londoners can share photos of the adverts on Twitter with the hashtag ‘#RadixTakeover’ for the chance to win 20,000 XRD, which equates to around $5,737 at the time of writing. There is also a bonus prize of 5,000 XRD for someone who retweets the Tweet.

Physical cryptocurrency ads have been a hot topic lately, with projects ranging from serious layer-1 cryptocurrencies like Avalanche to “meme coins” like Floki advertising in places like billboards. outdoor billboards and buses. In November, the UK’s advertising watchdog launched an investigation into Floki’s adverts after receiving several complaints. Although TfL (Transport for London) does not ban crypto advertisements, it places them under additional scrutiny before approval.

The community-funded Radix campaign coincides with the release of Alexandria, which provides “early access” to smart contracts for DeFi developers ahead of the Babylon Update in 2022, when smart contracts go live on the network main. Developers can already start building with Scrypto, the Rust-based smart contract language designed specifically for DeFi.

Although Radix does not yet have live smart contracts, it has already attracted a slew of projects, including Radix Collection (which awards badges based on participation in the Radix network), Samuskycoin (a meme coin built on Radix , which raised over $70,000 in its seed round, and Ociswap, which aims to be the first decentralized exchange on Radix after the launch of Babylon in 2022.

The project caught the attention of prominent players in the crypto space, including YouTube channel Altcoin Daily, which produced several videos touting Radix’s superiority as a technical solution for DeFi. Radix has been favorably compared to other coins such as Avalanche, Solana, Cardano, and Ethereum, and has attracted investment from investors and venture capitalists including Saul Klein, Taavet Hinrikus, and Willy Woo.

The Radix Tube announcements are expected to last until January 3, generating widespread publicity for the Radix Network and increasing the overall visibility of the project.

The previous post was written and/or published in collaboration between Benzinga’s internal sponsored content team and a financial partner of Benzinga. Although the article is not and should not be construed as editorial content, the sponsored content team works to ensure that all information contained herein is true and accurate to the best of their knowledge and belief. research. The content was for informational purposes only and was not intended to be investment advice.